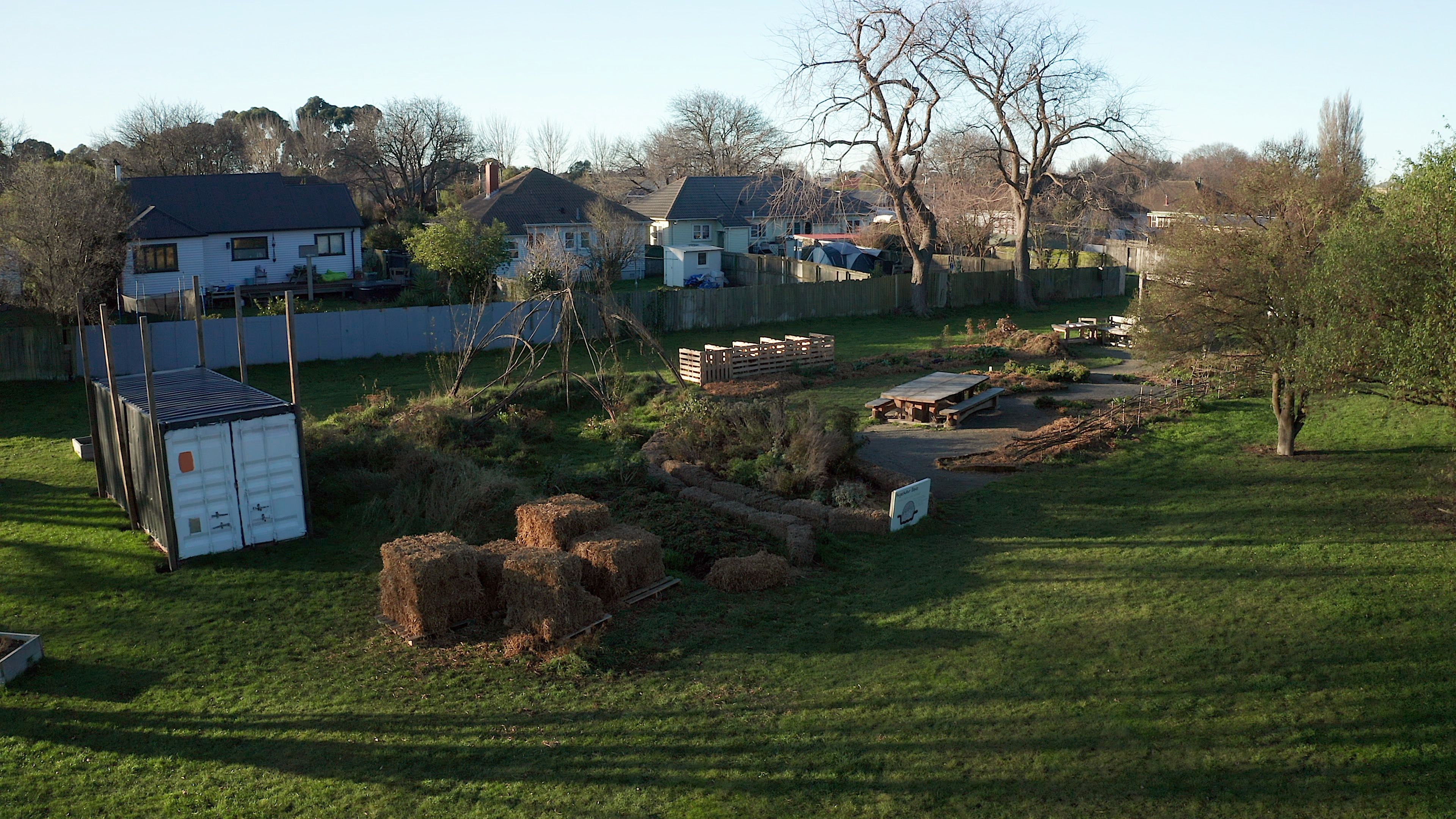 Creating community resilience from within the community

Urban Food Commons is all of us

Showcasing the work of the wonderful people of Roimata Food Commons in Aotearoa New Zealand, this film will explore – across three seasons – how an initiative taking place in a public park is building food sovereignty and community resilience in the city of Ōtautahi Christchurch.

Community resilience is going to be critical in the years and decades ahead, as we face humanity's many social, climate, and financial challenges.
Years spent researching and making films with a vision for inspiring change has convinced us that community resilience has a vital part to play in our future. And after nearly two years following the goings-on at Roimata, we’re excited to have the opportunity to make this film!
What does community resilience look like? It's happening at Roimata Food Commons, and we can't wait to share it with you. Here's a short teaser clip from our first film shoot!

“A community space to nurture the health and wellbeing of our community and the ecosystem in which it is situated.”
– Michael Reynolds, Roimata Food Commons co-founder
This beautiful project shows how community food resilience can be generated in commons spaces with joint community effort. In the film, we'll explore:
We'll also shine the spotlight on Roimata's co-founder and main driver, Michael Reynolds – an immensely passionate solo dad who’s given his all to this project. Pursuing round after round of funding to keep Roimata alive, Michael is a local hero and it's about time the world heard his story!

This film will inspire people all over the world to take a fresh look at their local spaces and consider how they too might contribute to reinventing the Commons.

We want our audience to feel so inspired after watching this film that they come away eager to get started. And like most of our films, this one will be made available free to view on YouTube to maximise its reach.

We're also considering what kind of resource kit we might co-create with Michael to help support the emergence of similar projects across the globe – now that’s an exciting prospect!

Your financial contribution will make it possible for Happen Films to create a high-quality, engaging, super-shareable film that can be offered free to the world.

And if we're able to source funding over and above the cost of producing the film (see budget details below), we'll use the surplus to create a resource kit that will help people take their first steps in recreating the Commons. This could include:
Let's make the Commons the globally common phenomenon it once was!

Production details
This film will be shot across three seasons in order to capture the gardens during three stages, and also to capture the progress Michael and his team are making as they develop from a small community food forest to a thriving high-impact community commons. Filming across seasons creates a more challenging production than is usual for us (our short films are usually shot over 2 or 3 days). For this film, the on-location crew will consist of just Antoinette and Jordan, to keep the rest of the costs down, given that travelling three times for one film creates a budget that is nearly three times higher. We feel it's worth if for this film! We're planning a film of up to 15 minutes in length.

Time frames
Filming was due to take place in late 2021, but was delayed twice and twice again in early 2022, in all cases due to Covid. The decision to film across three seasons came out of those delays.
Filming began in June 2022 (winter section); the spring section will be shot in October 2022 and the summer, final, section in February 2023.
Post-production (editing, sound mix, colour grade etc.) will begin in March 2023, assuming sufficient funding is secured.
Release is dependent on funding but we're aiming for April 2023.

Release
This film will be uploaded free to view on YouTube as soon as production is completed, promoted through our social media channels, and hosted on the Happen Films website.

A short history of Roimata Food Commons
Imagine what our cities would look like if all our parks were returned to being Commons areas, places where the community gathers to plant and harvest, to share and educate, to rejoice and celebrate together.

For decades, Radley Park, in the low-socioeconomic suburb of Woolston, was just an enormous grass expanse with a path running through it and a small children's playground. As with all city council parks it was a huge financial burden – mowing, spraying, maintenance and upkeep – yet the park was massively under-used.

Today, much of the grass has been replaced with a food forest, vegetable gardens, compost bays, worm farms, seating areas, a living willow shelter, and hügelkultur beds. During the week, working bees bring the community together and on weekends there are workshops, yoga classes and events like Friday Night Feed and Outside Movie Night. Locals come to harvest silverbeet and rhubarb, broccoli and raspberries. Apples, peaches, and plums are more abundant every year as the food forest matures.

The council has agreed to halt chemical spraying at the park and has reduced mowing of the grounds so that the gardens can expand. It’s a massive reduction in their overhead costs and, without the spraying, is making the park safer for the community.