Published on October 5, 2019 by Andre Staltz

Dear backers, guess what? Manyverse is now 1 year old! 🎂 🥳 🎉 Some of you might still remember when we launched the app back in late September 2018. Maybe it's not obvious, but the support you have given has been massively important to the project! You have financed 680 hours (roughly 4 and a half months) of development. In total, since launch, 1027 hours have been put into creating Manyverse, so it's clear two-thirds of that time was made possible by you.

Last month was very productive, with 174 hours (144 from Andre, 30 from Jacob) of work done, 6 new releases, and 78 backers in this Open Collective. The releases contained some exciting news: 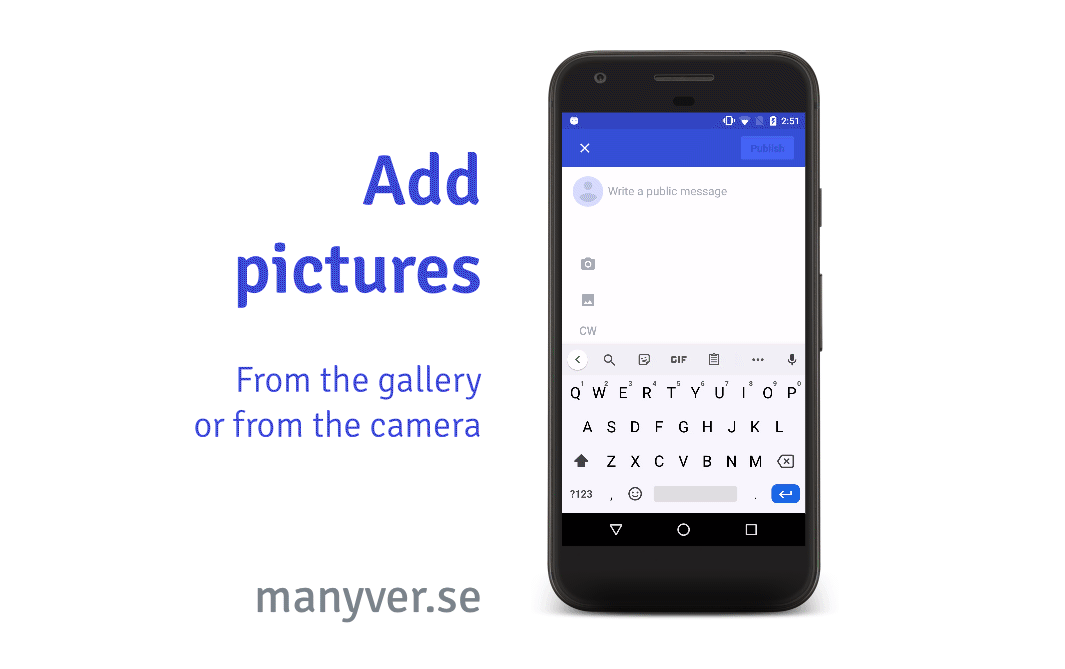 The jewel feature of this month is obviously the ability to add pictures to your posts (watch demo), something many of you have wanted. The Compose screen now has two buttons, one to add a picture from your gallery, and another to add a new picture taken immediately from your camera. These pictures are resized and compressed before shared to the SSB network. Also, when the picture is included in the draft post, a dialog appears, asking you to include captions for the visually impaired persons. We hope this supports a culture of respecting people with accessibility needs.

Also related to authoring posts is the new feature of composing replies in full screen (watch demo)! Now, when viewing a thread, you can either author your reply in the small text field at the bottom of the thread, or you can press a button near that field which will expand it into full-screen, and then you can author the reply just like you would do with a new top-level message. This includes the ability to add pictures and content warnings to your replies. Even better, you can also save drafts of replies, for any number of threads. Never lose a draft comment again.

During last month we also worked a lot on the internals of the app. There were 6 bug fixes, one of which was for a crash that many of you reported (thanks for the reports!). Internet P2P invites became a bit more reliable. And internally, we updated React Native to v0.60 and refactored the app to use react-native-ssb-client and remove some unnecessary code. This gained us some marginal performance improvements. Maintaining the releases on F-Droid are surprisingly time-consuming: we managed to bring Manyverse back to F-Droid (version 0.1909.11), but subsequent versions are now failing and we're working on it. I wish this weren't taking away our time from building other features, but F-Droid presence is indispensable.

The future is looking bright, I'll leave here two teasers of what's coming: this and this. You may be able to decipher what that means. But to be frank, funding is difficult for open source products like this. I'm grateful there are people such as you, and foundations and projects such as NGI0, but we need a minimum sustainability level to keep on going. I won't ask you to donate more, unless you can, but instead:

Thank you for reading this! With kind regards,