This month marked the release of a new version of Mun. It took us quite some time but after almost half a year, Mun v0.2 is out now! The most important feature of Mun v0.2? We now support hot reloadable structs.

After the release of Mun v0.2 we saw an influx of community members, who pulled together to fix some of the issues in the release:

Our Discord also saw a spike in user activity and we have had some really fruitful discussions there. We hope to include the community more and more in the entire design & development process. To that end we have added several tracking issues for new features that we want to develop in the coming months.

Besides tracking issues we have also added additional good first issues on Github, which is a good starting point for anyone who wants to get involved with Mun:

If you are interested in helping develop Mun - but are not sure where to start - feel free to reach out to us on Discord or Twitter. To support our cause, please consider donating to our Open Collective.

At the start of this month we were able to put the finishing touches to the second release of Mun. As mentioned, the Mun v0.2 release features hot reloadable data structures that are automatically memory mapped, but that’s far from all new goodieness. Some other interesting features that were added this month are:

The complete list of changes for Mun v0.2 can be found in the release notes.

We launched an official Visual Studio Code plugin that adds full support for syntax highlighting of Mun v0.2 code. Our goal is to extend this plugin to better integrate with VSCode through the language server protocol. This will hopefully also benefit other editors in the future. The plugin is available on the VisualStudio Marketplace and on Github. 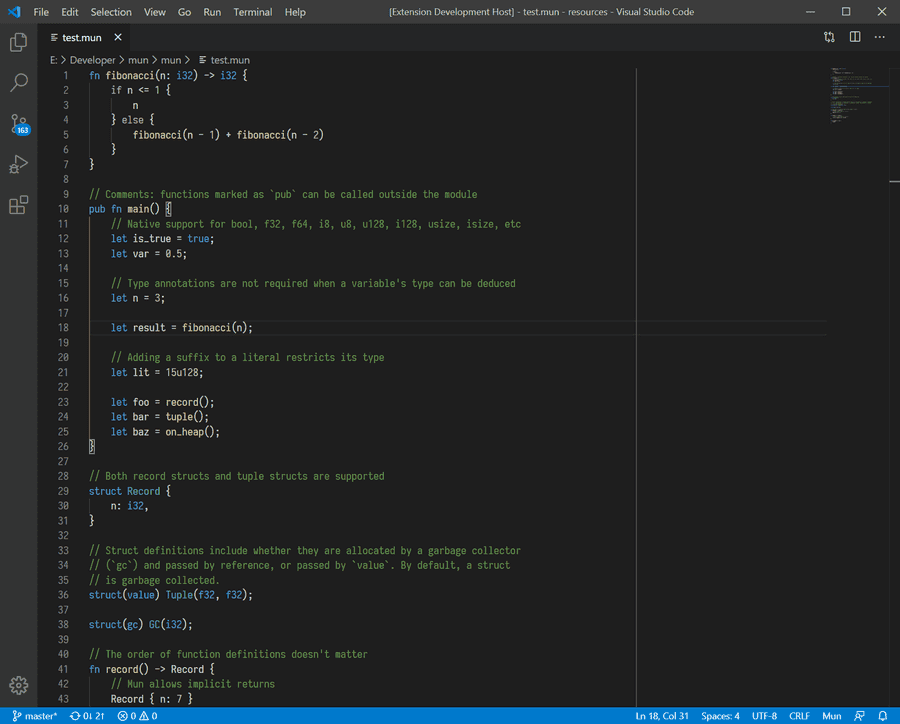 Now that Mun v0.2 is out of the door, we can focus on developing the next version of Mun. We work according to a tick-tock release cycle. During a tick release we implement new language features, whereas a tock release focuses on bettering the status quo by removing technical debt, fixing bugs, and improving overall ergonomics. Since Mun v0.2 was a tick release, Mun v0.3 will be a tock release.

We try to be as transparent as possible, so to that end we posted a high-level roadmap on Github that details new features for the upcoming two releases - Mun v0.3 & v0.4 - as well as a backlog of features that are still to come. We also assigned milestones to and labelled all issues to make them more insightful. The milestones can be reviewed in this overview.

Our goal is to release Mun v0.3 a lot sooner than Mun v0.2. Hopefully after a few months instead of half a year. Please stay tuned!