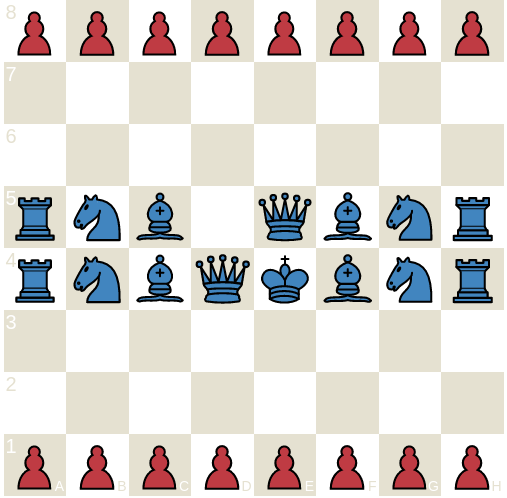 Online chess game with modified rules where the pawns rise up

We're ready to publicize the first live version of the game. We've found the AI to be working pretty well, and made a few tweaks to make the game more usable. Now we're making posts for social media to try to get as many people playing as p...
Read more
Published on May 1, 2022 by Will Stedden

Uprising Chess has an AI

I've been so excited to try to build a proper AI that works for Uprising Chess for months. I finally found the time over the last week, and I'm really excited to get to share it. The most interesting thing is that the AI plays in a way that...
Read more
Published on April 23, 2022 by Will Stedden

Chess is one of the most popular games across the world, but what do its rules say about the way the world should operate?  When you look at a chessboard, you see two rows of unadorned pieces called pawns, a representation of poor foot soldiers conscripted to fight for the nobility.

But what difference is there really between the black pawn and the white pawn?  Don't they have more in common with each other than they do with the royal pieces?

We found chess to be a perfect metaphor for the world we find ourselves in: oligarchs find ever more sophisticated ways to manipulate working people with arbitrary divisions—keeping us fighting each other instead of banding together to fight for a just and sustainable world.

So we introduced Uprising Chess as a commentary and a blueprint for what a grassroots revolution would look like.  You can read more about the rules, reasoning and gameplay on our website or visit the game at uprisingchess.web.app to play.
The project is ongoing with only modest costs associated with running the game servers.  If you are interested in seeing the game's further development, please don't hesitate to donate a few bucks.