Support antipodes café in the production of a set of 6 volumes about æSeries, æHouse and its rooms. Grant your copy and receive special gifts. —

Since2013 antipodes café (æ) organize a series of trans-disciplinary explorations in the encounter of Oslo and its construction sites, which attempt to highlight its potential for multiple social approaches far beyond profit and way closer to people, local contexts, and of course all workers implied in the development (which may also, and hopefully, fall into question).
“The city of the future” is where construction sites are always present?
These encounters are ephemeral, between old and new, in a present which masses would avoid for considering uncomfortable for being ugly and noisy, dirty and dangerous, but clearly for their undefined transient nature. Paradoxically, people arrange in cities pursuing stability not granted with seasons, finding no more than constant challenges and changes.
Not surprisingly these rejected areas of impunity are commonly visited by all sorts of segregated ones and guards controlling that no one attempt to appropriate them. On the other hand, spectacle has free-way to adapt its banners, temporary showrooms, art, bars and festivals to these encounters, and play a servile role mesmerizing to trivialize the current state for keeping active the machinery of growth beyond limits and its promises of bright future. No crane is building rooms for discussing alternatives, and cameras are in blossom in public and private open spaces.
Understanding this scenario and gentrification processes, antipodes café put its unwanted-plants-logics-for-urban-interventions into action, and created venues and intimate moments of active reflection, while keeping a level of singularity for protecting and inviting diverse voices, as well as for avoiding being absorbed nor replicated by developer and their incumbent private –and public– supporters.

æHouse was the best example in this sense.
Started in 2017, it consisted in a conglomerate of scattered venues, representing rooms of an ordinary house, such as living room (æStue), kitchen (æKjøkken), office room (æStudio), storage (æBod). Each one had its own context, timeline and program. Countless coffees, teas and activities were served free of charge to a wide range of people from all ages and backgrounds. Economical transactions aside, placement, design, communication, as well as an intimate way of approach and use of the context, helped to invite those that this current state is basically kicking out, together with Jante lovers, yuppies, professionals, tourists, politicians, bureaucrats and city developers. Age was not a barrier neither. Lot of cultural initiatives are being oriented for kids lately, but when was the last time you saw kids in Oslo going on their own to gathering venues, such as a café, where their voices will be heard as much as those from students, unemployed, pensioners, migrants, roamers, homeless, mental and physically ill… and basically any kind of people?
In addition to visitors, everyday life became a performative act of disruption for inquisitive passers by facing venues as stages or sculptures, and the inhabitants and visitors as actors of a play without script, made with the debris of the epic fourth wall.
Unfortunately, due to COVID-19 antipodes café resolved to anticipate the consummation of æHouse, cancelling dozens of activities and the development of the sleeping room (æRom was going to be a mobile hut moving from encounter to encounter, where to share morning coffees, while exploring law frames on temporary housing).
In a positive reading of the situation, the anticipation gives better frame to conceive these publications, exhibition and presentations planned for after closing all rooms. 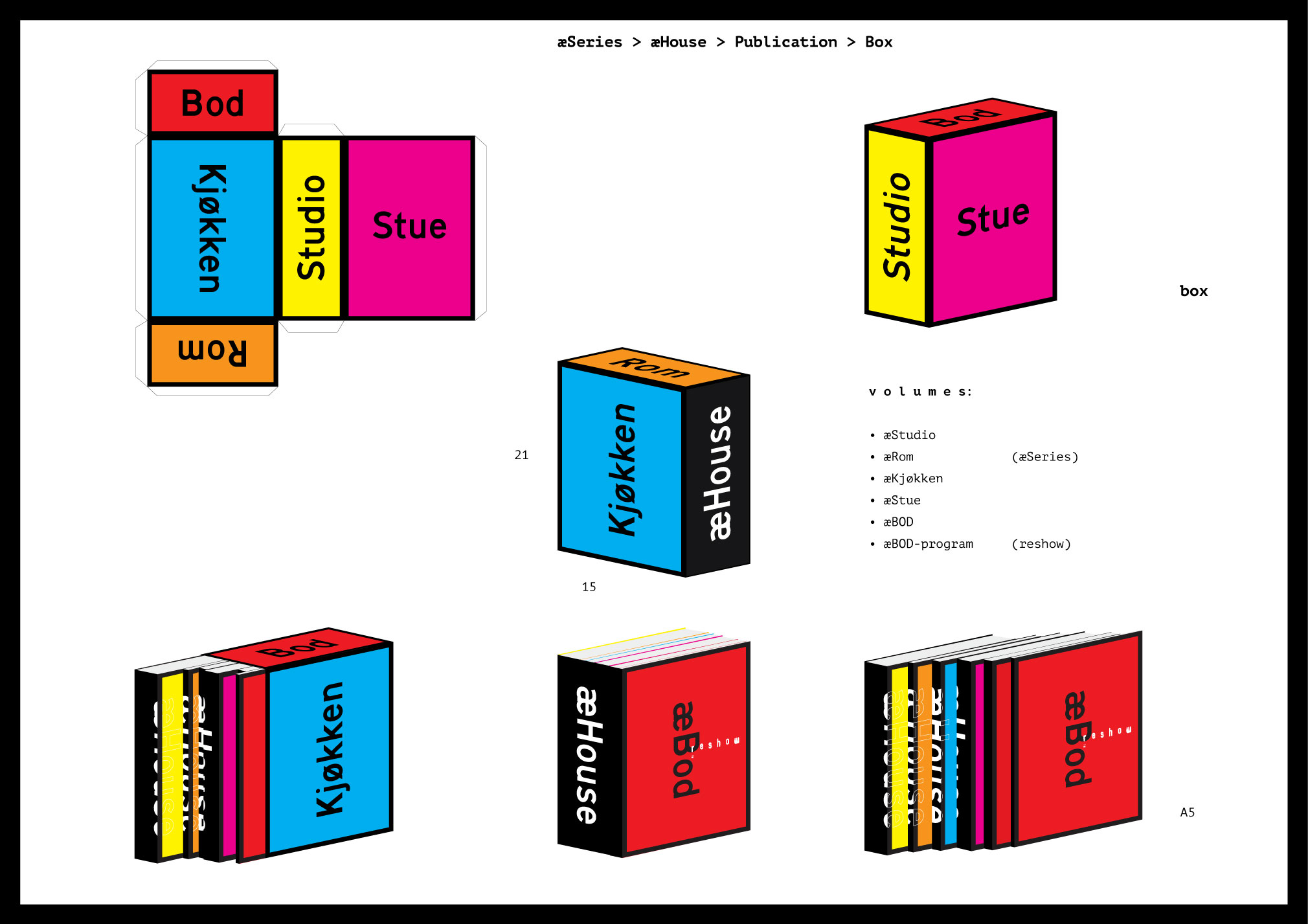 Around 600 pages divided in 6 volumes.

Volumes
With doors closed to public, the last aforementioned volume was made at æStudio in past months. It is the one with less information specifically on æHouse. It focus on presenting the program held at æBod with an exhaustive level of details, as an example of the infinite possibilities of things that one can do at the encounter of the city and its construction sites and following it logics. It is currently being corrected as English is not our thing.