Resourceful and possessing an encyclopedic knowledge of the physical sciences, he solves complex problems by making things out of ordinary objects, along with his ever-present Swiss Army knife, duct tape, and occasionally matches. He favors non-violent resolutions and prefers not to handle firearms [Wikipedia]

Although the TV show MacGyver is slightly before my time, it has a long reaching legacy with ideas that inspire people in all domains including of course IT - where the sentiment expressed in the description of the lead character above is certainly echoed at hackathons around the world. In this update we announce a new featureset, released in collaboration with faculty and students of the Bern University of Applied Sciences, who have provided me with highly valuable feedback and support - and a small but very well organized hackathon to battle-test the results at - in the last couple of sprints of dribdat.

The latest release v0.4.8 of the platform - dedicated to L.M. - notably includes support for "crowdsourced progress-linked resources", something that we rapidly designed and started using at the Hack4SocialGood event last week. This is described below in the section of Resource Views. New embedding options and SSO support made it possible to more seamlessly install the platform into the enterprise software environment of the University. But first, let's talk about the most exciting thing: collaborations! 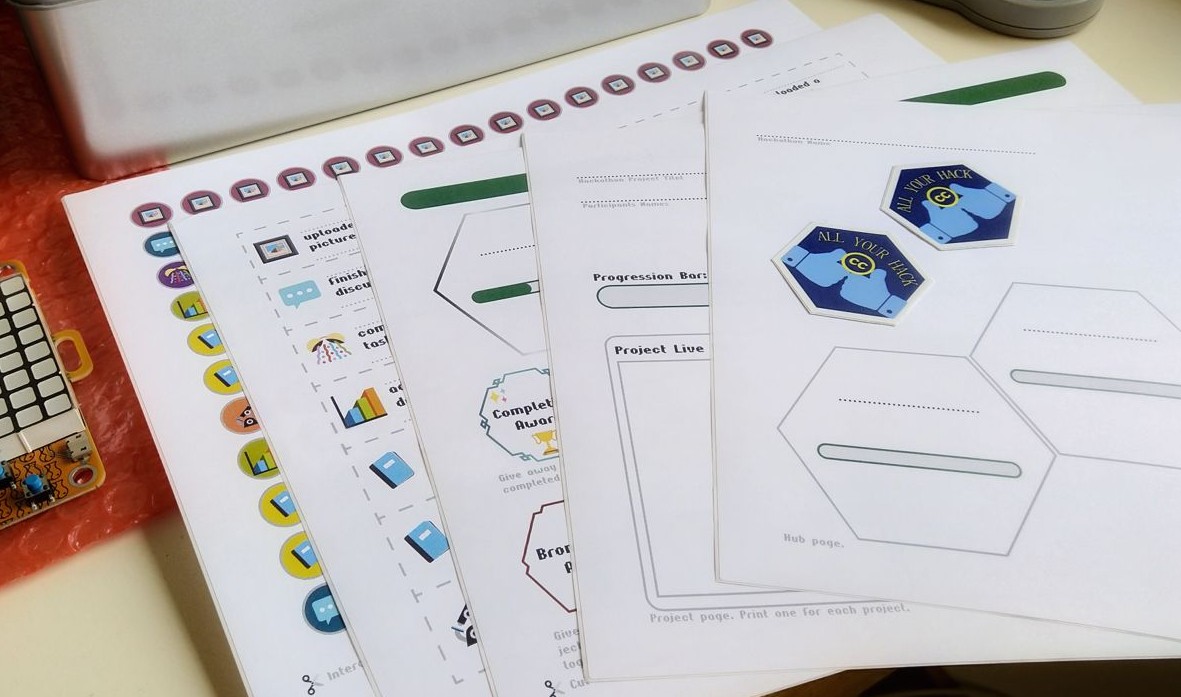 Thanks to the grant from Innosuisse and input from the Hackathons-as-method research project, I commissioned @Koboldgames to develop a game concept based on the dribdat platform and our hackathons. They have been working with us through the summer and their ideas are available in the form of a paper-based hackathon game, as seen above.

By focusing on the user journey and making some of the "intangibles tangible" that go into the hackathon experience, the game should help us to come up with interesting new features through the methods of User Centered Design (a grounding in which I would like to among others thank Swiss engineering company zühlke for). In the spirit of Game Dev Tycoon and the like, playing a sim-hackathon should even be fun, once you get into it! These newly published materials are openly available now at hackathons-ftw/gamification and we plan to invite folks to play-testing sessions in the spring.

A few weeks ago we started a new interactive handbook for users, addressing in particular the orientation needs of beginners. It is available at using.dribdat.cc and the sources can be found here: https://github.com/hackathons-ftw/handbook. It has been deployed at Hack4SocialGood, and is currently somewhat tailored to the platform we have set up there. You'll see that we also started a refresh of a more traditional paper-based manual, something that was started a year ago by our HES-SO student team.

Making hackathons in general more open, accessible, sustainable, transparent and fun is a strong core of what this project is all about - and sometimes it really helps to get these ideas down "on paper". As a next step, we would like to make the interactive handbook baked into the user interface to become a contextual help for users of the platform. Many thanks to @ResonantFrequency for beginning this very promising story.

Organizers and participants of hackathons can recommend code, data and tool resources (site wide, not event-specific) using the new Resources menu in the backend. This is something that we have always done at hackathons, but until now in a manual and rather gnarly process involving HTML code, separate websites, external Airtables and GitHub Projects, and the like. Until now a lot of valuable data was being lost by not being able to clearly link the progress of hackathon projects with the instruments (code frameworks, open datasets, etc.) of their success.

There is now a simple form available to administrators and participants to recommend a resource: 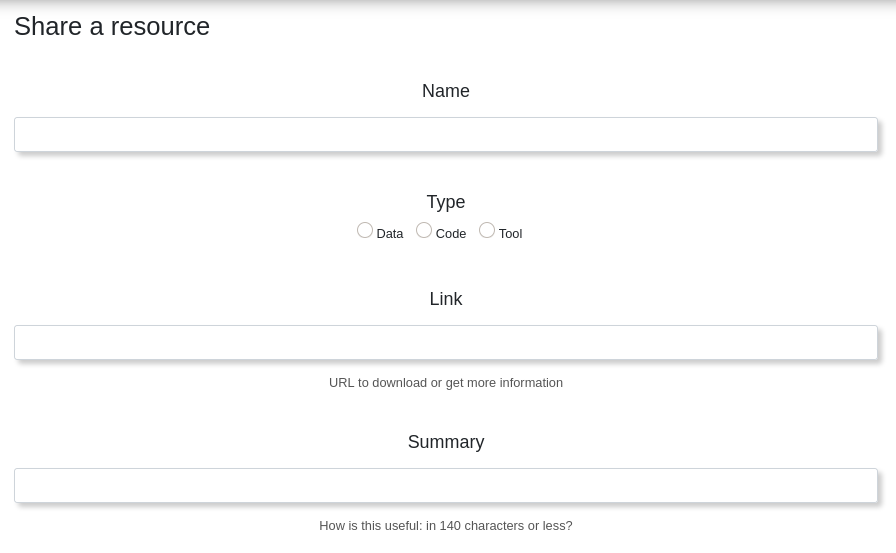 The teams can see links this content in the global Resources area of the site, accessible from the top navigation: 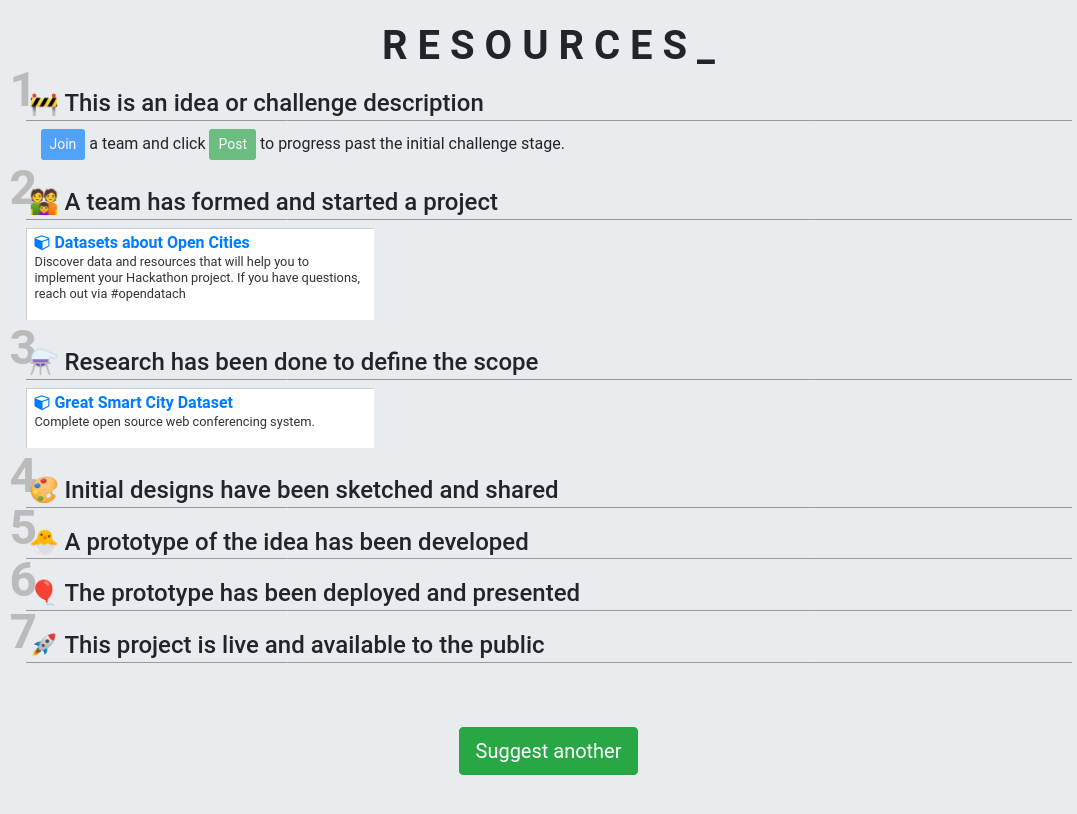 Or link directly to a resource from their team's project page, appropriate to their current level of progress:

This unlocks a lot of interesting potential to bridge the gap between hackathon participant and resource-provider, and I look forward to hear what folks think of this development track, which continues with support for syncing remote metadata in #222.

It is now possible to configure Single Sign-On with Microsoft Azure, and the path is paved for making it easier to sign in through even more platforms (GitHub, anyone?). We have developed and tested close integration with Microsoft Teams, with a new URL parameter ?clean=1&minimal=1 that allows optimal embedding of the platform into tabs of the collaboration platform: 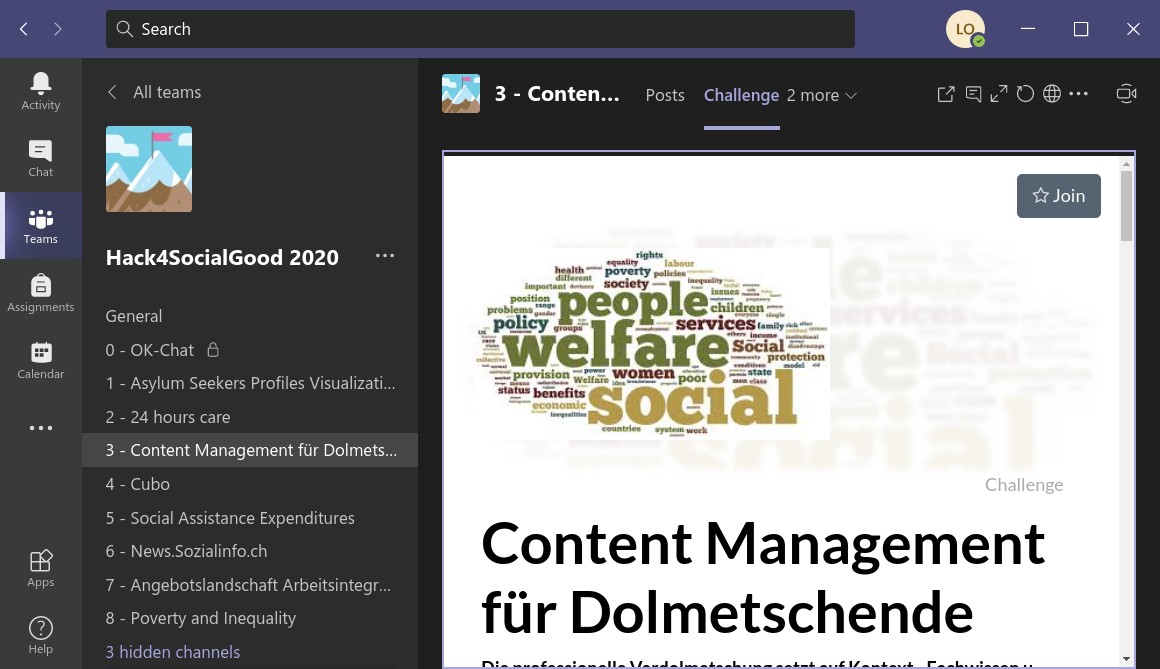 Events are now listed as "upcoming" or in the "past", with an improved layout on the home page. This is an itch that we've been meaning to scratch for a long time, and will particularly benefit our larger community instances as well as efforts to aggregate hackathons, as you can see here in this screenshot from db.schoolofdata.ch below. Let us know what you think, if you have any other ideas to make the homepage more useful. 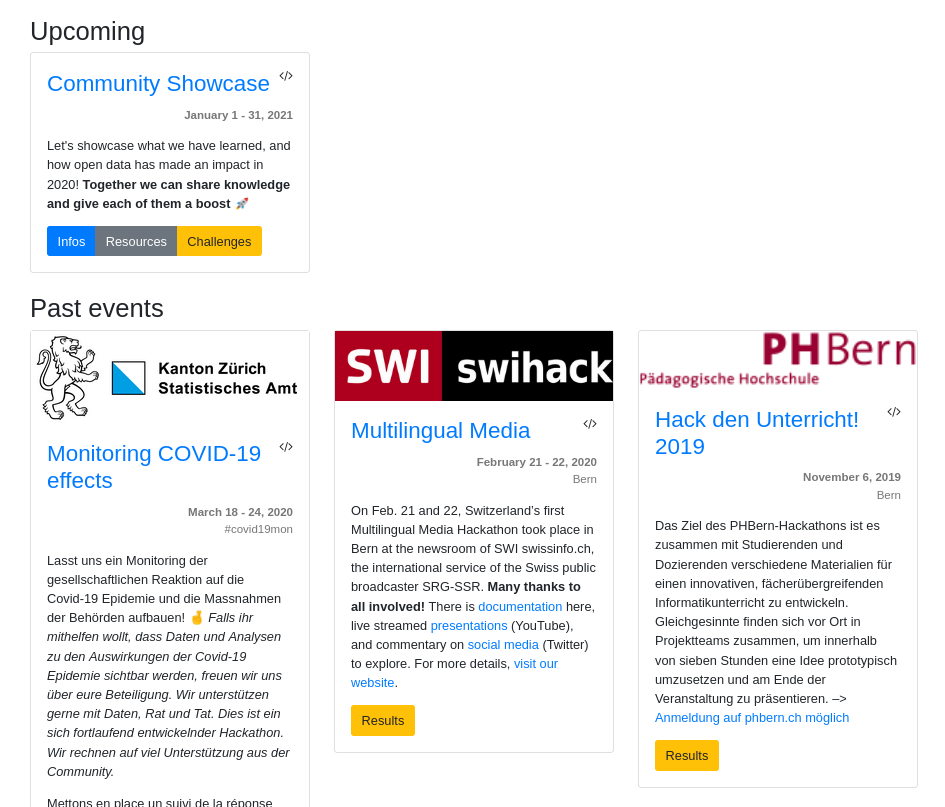 Many thanks to the BFH Soziale Arbeit, Wirtschaft and IT departments, to the Innosuisse program, and in particular to the individuals Oliver Hümbelin, Nada Endrissat, Sarah Müller, Debra Hevenstone, Krister Nonhaugh, Michael Schmitz, Catherine Spivey and Jasmin Widmer for their contributions to this release.