Published on February 6, 2020 by Erick Lavoie

Dear backers and community, there are still more sprouts and outgrowth in the SSB ecosystem. Please join me in this forest walk!

Martin Krafft (aka “martin”) presented “What Makes Decentralization Hard?” at Linux Conference Australia 2020, proudly wearing an SSB T-shirt. The talks covered numerous other developments including cryptocurrencies and other decentralized projects, such as Matrix. 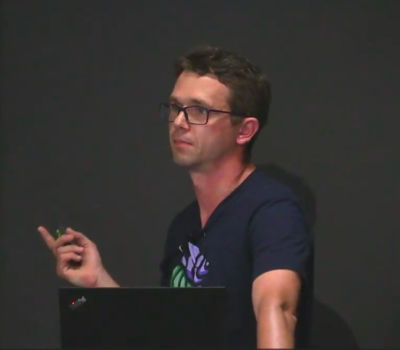 Christian Bundy (aka ‘Christian Bundy’) organized informal calls for community members to hang out together without specific goals on meet.jit.si. The first call, which lasted two hours, proved successful enough that more are planned for the future. 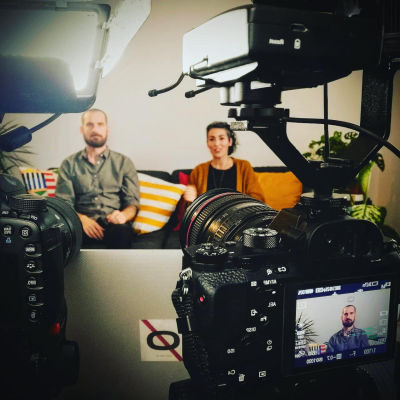 Emile (aka “emile”) analyzed the value proposition of SSB according to the expected features of PeerGos’s “perfect” social network. While falling short of some, SSB already provides:

1. Identities independent of a hosting provider;

3. A user-controlled feed, free of advertisements;

4. the ability to self-host infrastructure while interacting with other users.

Andre Garzia (aka ‘Soapdog’) presented the talk “Loanwords, Agriculture & WebAssembly” at the Free and Open Source Software Developers’ European Meeting (FOSDEM) 2020, which looked at how the Web ecosystem sustainability could be informed by jargon and native indigenous agricultural techniques. 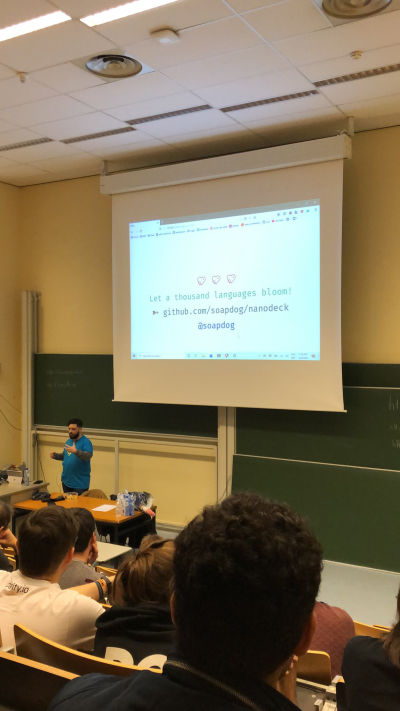 Evan Henshaw-Plath (aka ‘Rabble’) presented SSB and Planetary.social at the Internet Archive, as part of the “Exploring Decentralized Social Media” evening, organized by the DWeb SF Meetup. The presentations are all available online. 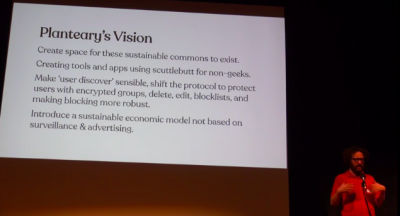 Visualization of the Community

Hendrik Peter (aka “Hendrik Peter”) used the ssb-to-graphml tool, originally written by Andre Staltz (aka “andrestaltz”), to produce a visualization of the SSB community, from their viewpoint: 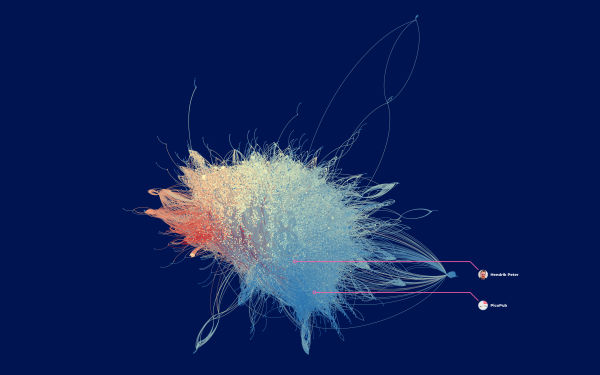 Their website also has a higher resolution image that shows their Pub and their SSB ID in more detail.

Venue for the event is the Spiegelgasse 1 in Basel. Arrival time starts at 13:00, followed by an SSB tutorial primarily aimed at the external guests. The main welcoming session will begin at 16:00. The event ends on Sunday at ca 15:00.

We ask for an entry fee of 60 Swiss francs (or 56€) to cover expenses for meals (40 francs for 2x breakfast, 3x lunch, 2x dinner) and to reroute some money to folks who otherwise would not be able attend (see below). You can pay on site. Any excess money will flow into the european ssb open collective.

Charles Lehner (aka ‘cel’) will host a 45 min. SSB session at LibrePlanet 2020, the annual conference of the Free Software Foundation. The talk will present the core technologies, applications, some values and culture of the community, how the community organizes itself, how it practices diversity and inclusion, and where it may head in the future.

The CILG met twice in January to discuss the previous survey results and plan the next steps.

Improving the Documentation of SSB Packages

Marcos Gutierrez (aka “gmarcos87”) has worked on improving our documentation, funded by the Maintenance Fund.

Charles Lehner (aka ‘cel’) released a binary version of 2.7.0 of git-ssb and associated script, to ease the installation of the tool. The tool enables the publishing of git repositories on SSB, as well as the management of associated issues and pull-requests. There is an associated guide on how to use it. The work was funded through the Maintenance Fund.

Cherese, an intern working with Mix Irving (aka ‘mixmix’), created a profile visualizer for Ahau (which means “I, me” in Maori). 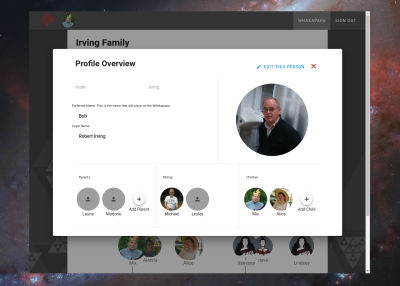 Meanwhile, Andre Staltz (aka “andrestaltz”), also joined the team to help with mobile developments, and created a reusable starter template for building Android mobile application based on SSB. The team released version 0.3.0.

Vector Bjelkholm (aka “VectorBjelkholm”) introduced MetaButt, an application editor written on top of SSB. Queries for SSB messages and UI compents are stored on SSB, and can extend other existing queries and UI components. A short video demonstration is available on the SSB post.

Evan Henshaw-Plath (aka ‘Rabble’) shared a long development update on Planetary.social covering the last two years of development, as well as plans for the future.

Emmy Bevensee (aka “Emmi Bevensee”) built cool tools for analyzing (regular) social media with some proof-of-concept for p2p. The tool was designed to help activists, journalists, researchers, and other social good orgs to analyze and visualize larger trends on a variety of social platforms.

Anders Rune Jensen (aka “arj”) released a new version of SSB Browser, an implementation of SSB that is fully hosted in a Web browser, that you can try here. This version works on mobile devices and has been optimized to show the latest posts of users quickly.

They also released SSB browser turtle, a minimal core similar to SSB browser, that can be used to serve other kinds of applications, also served as SSB messages (“It is turtles all the way down”). 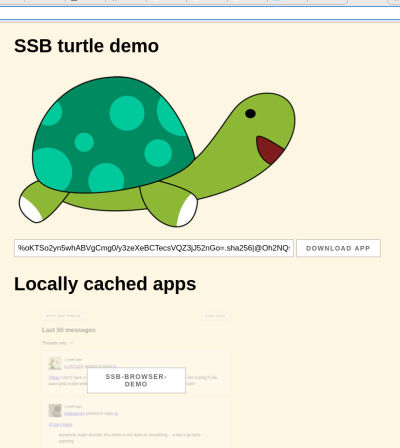 Luandro (aka “Luandro”) shared a post-mortem on Huin!om, a project to bring an SSB-based audio messaging application for the San people in the Kalahari Desert, funded by the APC. The project managed to create a working prototype early but the phones on which the application was ultimately deployed were much more resource-constrained than those used for development. The limitations proved to be too strong for the current state of the SSB stack. 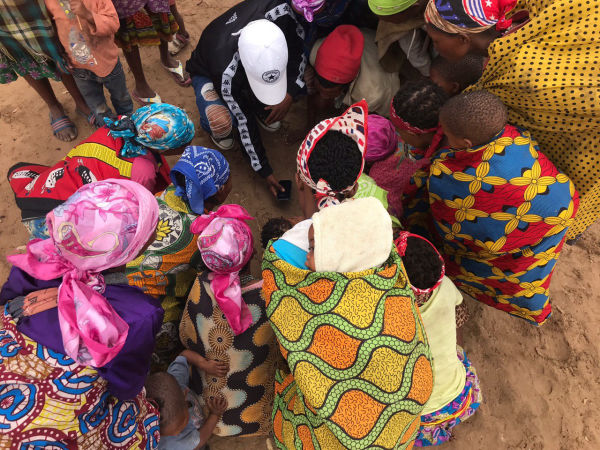 Luandro (aka “Luandro”) and Dominic Tarr (aka ‘Dominic’) are now looking for funding to create the next generation of the project, possibly by basing it on a reduced version of the core stack or by significantly improving its performance.

Thanks to ‘m k’, ‘Andrew Lewman’. ‘Timothy Robinson’, and all our other backers for their continued support. You have collectively added 228.74$ (after fees) to our accounts in January (we had additional donations after the last newsletter!). This has helped to pay for Cel’s hosting fees (-11$).

See you again in Mars!