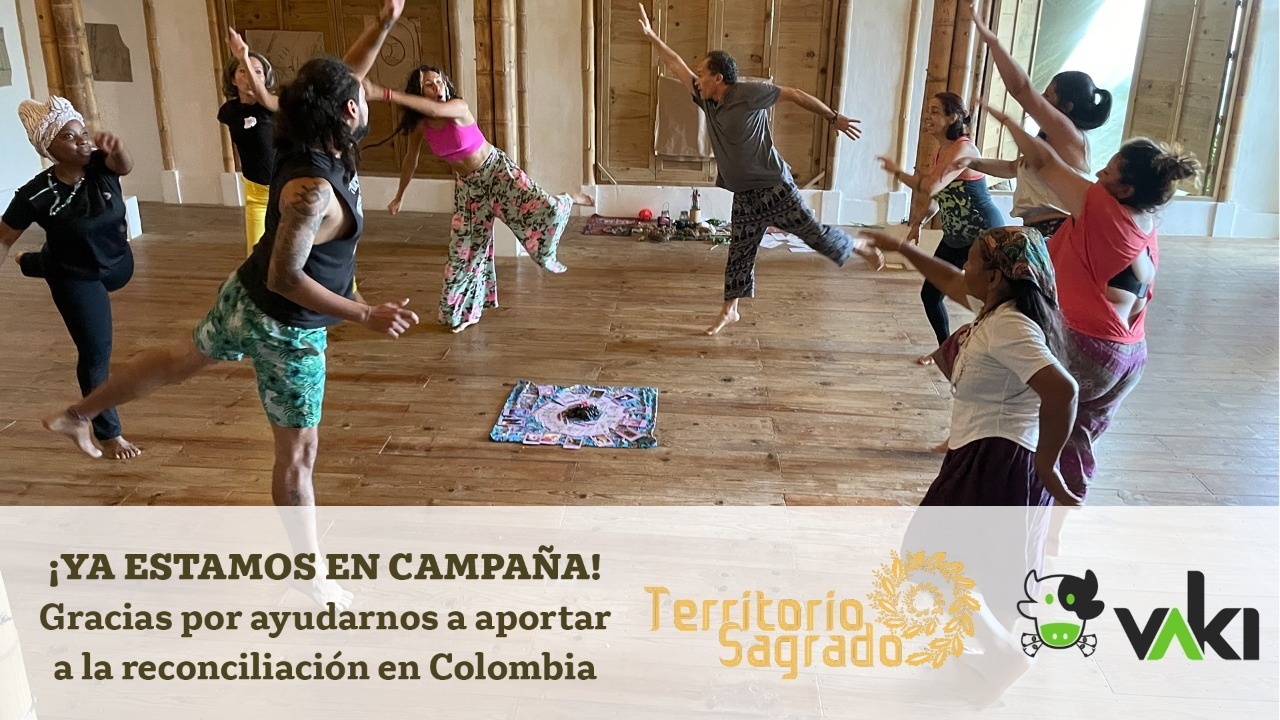 ImaginAction is coming together to support Sacred Territory as a performace that seeks to contribute to reconciliation in Colombia. Connecting human beings, in an intimate relationship with nature.

My name is  Hector Aristizabal, and I am the director of Sacred Territory and founder of ImaginAction since 2000. I have been working in war-torn countries for over 30 years developing Theater for reconciliation; Sacred Territory is a project that is allowing me to bring many of these experiences together.

I thank you for your support.
Pay attention that when you make a donation the default platform is 15% you are free to change and set it that you want (including 0)

The starting point of Sacred Territory is the stories of six women whose lives were marked by the war in different ways. The armed conflict has desecrated life, desecrated bodies and, in particular, women's bodies. What happens in our bodies reflects what is happening in the soul of the world. We want to give a place to what is alive in us, to find in the stories of these women the unimaginable force that allowed them to survive, a sacred force that also speaks to us of nature’s regenerative power.

Sacred Territory is more than a set of stories of women amid conflict. We believe that the medicine is in the wound and that is why this is not a play in search of an audience, but an invitation to a ritual experience in which protagonists and assistants collectively unleash an alchemy that allows the pain of war to be transmuted into a threshold towards reconciliation.

Through the personal stories of the protagonists, we open the door to the collective unconscious, where everyone can reconcile with their own pain and discover that our story is part of everyone's collective memory. Telling ourselves our stories allows us to re-signify them, transforming ourselves in the process. Each story is a fractal of many other stories, and by recognizing each other as such, it helps the collective to heal, not only the human collective but the larger collective of which we are part of nature, herself also wounded by war and the excessive ambitions of human beings.

We want to take Sacred Territory to all the places where political and social polarization has undermined peacebuilding. We wish to open spaces for improbable dialogues between people from different shores and the other than human world. We dream that from these dialogues may emerge agreements to carry out actions to regenerate nature, we dream that by healing nature, we all heal.

With this campaign, we plan to collect 160,000,000 million pesos, or nearly $40.000 thousand US dollars, to assemble the team and finish the final rehearsals of the play.

Plant a seed of reconnection with us! Be invited to a special zoom launch party of the Sacred Territory performance and the ImaginAction network.

Nurture active hope for peace in Colombia with us! Be invited to a zoom workshop with Hector Aristizabal (director) and the Sacred Territory perfor... Read more

Grow with us, a Theatre for Reconciliation! Be invited to a personal mentoring session with the ImaginAction’s team to reflect on your gifts + Be i... Read more

Connect your network to ours! A unique workshop and screening of the play for your community + A special mentoring session with the ImaginAction’s ... Read more

Sacred Territory: Ritual for reconciliation is all of us

Thank you for supporting Sacred Territory: Ritual for reconciliation.

We want to thank all of the people who have participated in our fundraising to support the work of Sacred Territory. We will be receiving donations until December 10, 2022. Here the voices of two ex-combatants from FARC and the Paramilitari...
Read more
Published on November 28, 2022 by Uri Noy Meir