Hey backers! March was one of the more productive months for Manyverse, as I got to work over 120h, which is close to full time. And with every new backer that joins, no matter the size of the contribution, it always brings me some joy. Besides the emotional support, it also mathematically adds up, and helps make this project less hobby-like. I've been excited about this mission since 2017, but now I'm starting to have a new type of excitement: that it's becoming real.

Here are the visible developments that were published in the last 30 days: 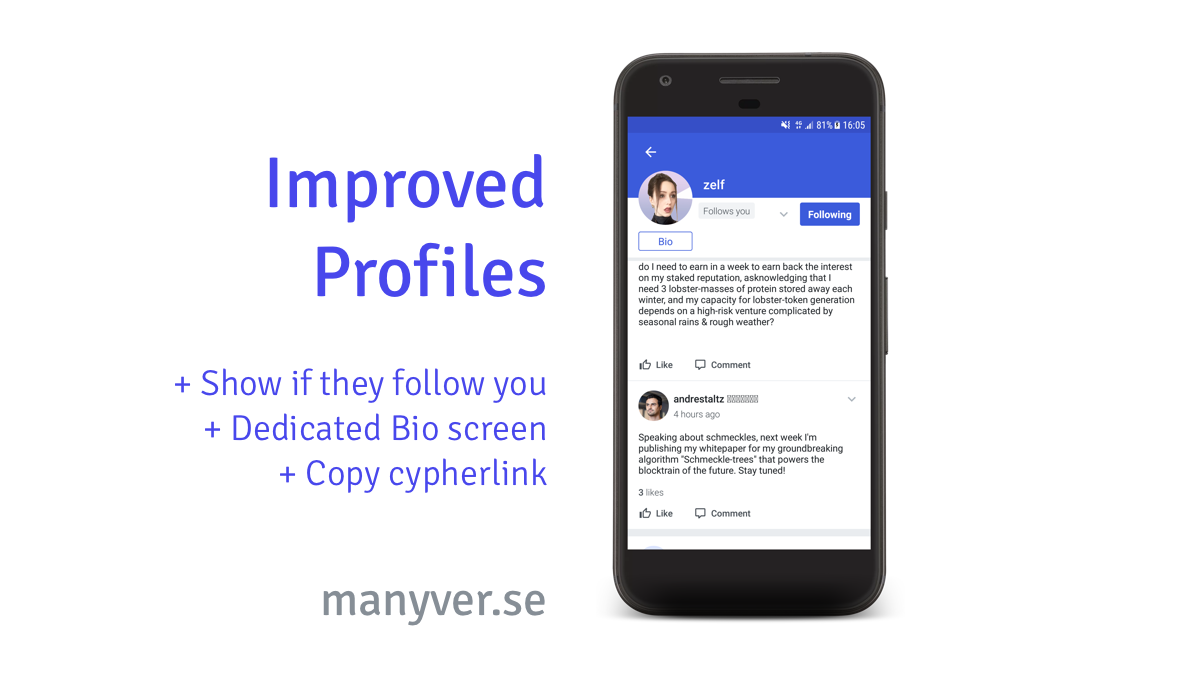 I also changed the app's Thanks screen to show a few more backers. Our acknowledgement rule is now different: the top 5 backers (by total amount contributed) are now acknowledged in the Thanks screen. The previous rule picked backers in the higher tier only. The new rule helps to highlight long-time committed backers, even if their monthly contributions seem small, their long-term participation adds up significantly. The app should be updated monthly with an updated list of names.

There were two developments that were mostly invisible, but very important to build a good tech foundation. One of them is the so called "gossip plugin refactor". This has been a necessity in the SSB tech stack for a long time, but no one dared to do it until now. The "gossip plugin" is an important module which manages which peers (and pubs) your app connects to. It's a very old module, and still carries old decisions that nowadays might not make sense anymore. For instance, the gossip plugin will still connect to a pub, even if you have blocked the pub account. Instead of making quick fixes to this plugin, I have decided to rewrite the entire gossip plugin. I have laid out the plans in this Manyverse GitLab issue, and have already published first versions of ssb-conn-db, ssb-conn-hub, ssb-conn-staging. Once the SSB Conn libraries are reliable, we will have better control over all the connections your app makes with other peers, and we will be able to manage all the variety of connection channels (internet, Wi-Fi, Bluetooth, etc).

The other invisible development that I have worked on was a new type of SSB server that resembles "pub servers", but has a different purpose. My goal is to make it easy for anyone to start and maintain their own SSB server (if they wish), without demanding any developer skills whatsoever. I managed to build something very interesting, but after receiving feedback from developers I trust, I decided it's not yet time to publish. But as soon as these details are figured out, you can expect an exciting new phase for Scuttlebutt and Manyverse, in terms of adoption and usage.

Finally, you may have noticed that we now have a Mastodon account, hosted (conveniently) by the Fosstodon instance. People have asked for that as an alternative to the Twitter account, and it's been interesting that the Mastodon community has engaged a lot with Manyverse. Although both Manyverse and Mastodon fall into the category of "decentralized social networks", I see these two projects as being very different. Manyverse is by all accounts focused on supporting off grid usage, while Mastodon assumes internet connectivity to begin with. Because of these foundational assumptions, Mastodon is better at some things, while Manyverse is better at other things. I personally believe the off grid agenda is crucial in the long term, both for the future of the internet (specially under new regulations and dominant market players), and for underconnected communities in the Global South. It's a big goal that will make more sense as we move into the future.

Thank you for being a vital part of this endeavor,