After a short break, I'm back and bring lots of news! To start off, we got a new release published.

Version 0.2009.4 has a couple of new small features, including some by two new developers from the community! Rômulo Alves and Michael de Wit sent pull requests that were of high quality.

The feature that may catch your attention most is audio messages. This was in our roadmap since always, but not of urgent priority. Patchwork (SSB app on desktop) allows people to attach audio files to their posts, but in Manyverse those would appear incorrectly as images (that never actually loaded). Rômulo came in and enabled the app to recognize those attachments as audio, not image, and allow you to play the audio. 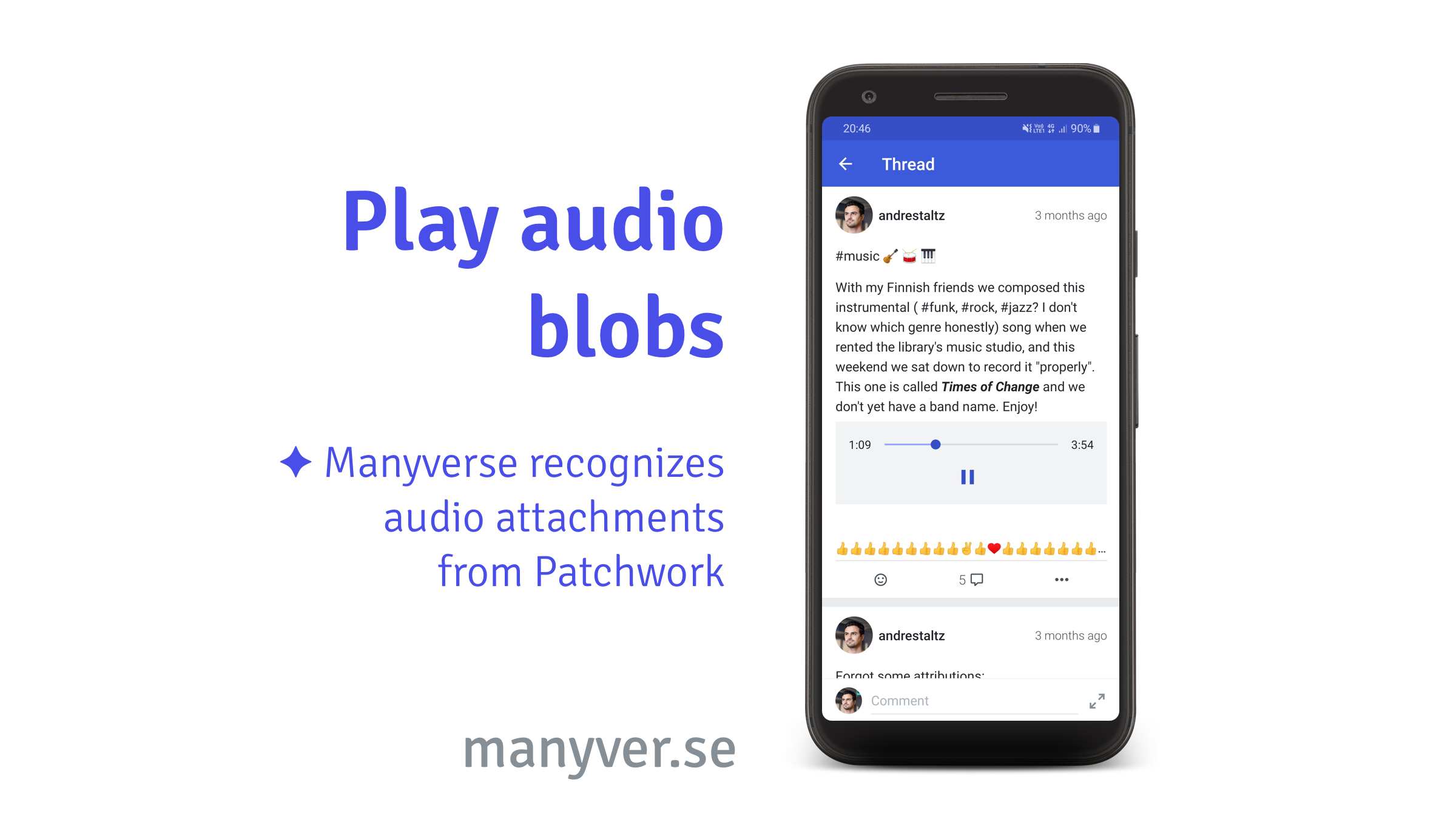 So far there is no feature to publish audio messages in Manyverse, only listen to them. But at least now we have half of the functionality ready, hopefully in a near-future release we will also have publishing of audio messages!

The other feature that is quite visible is the unread marker on threads in the Feed. Now, threads that are new or have new replies are highlighted with a light blue background color, which disappears as you read it. This should help you know which threads changed when updates come in. 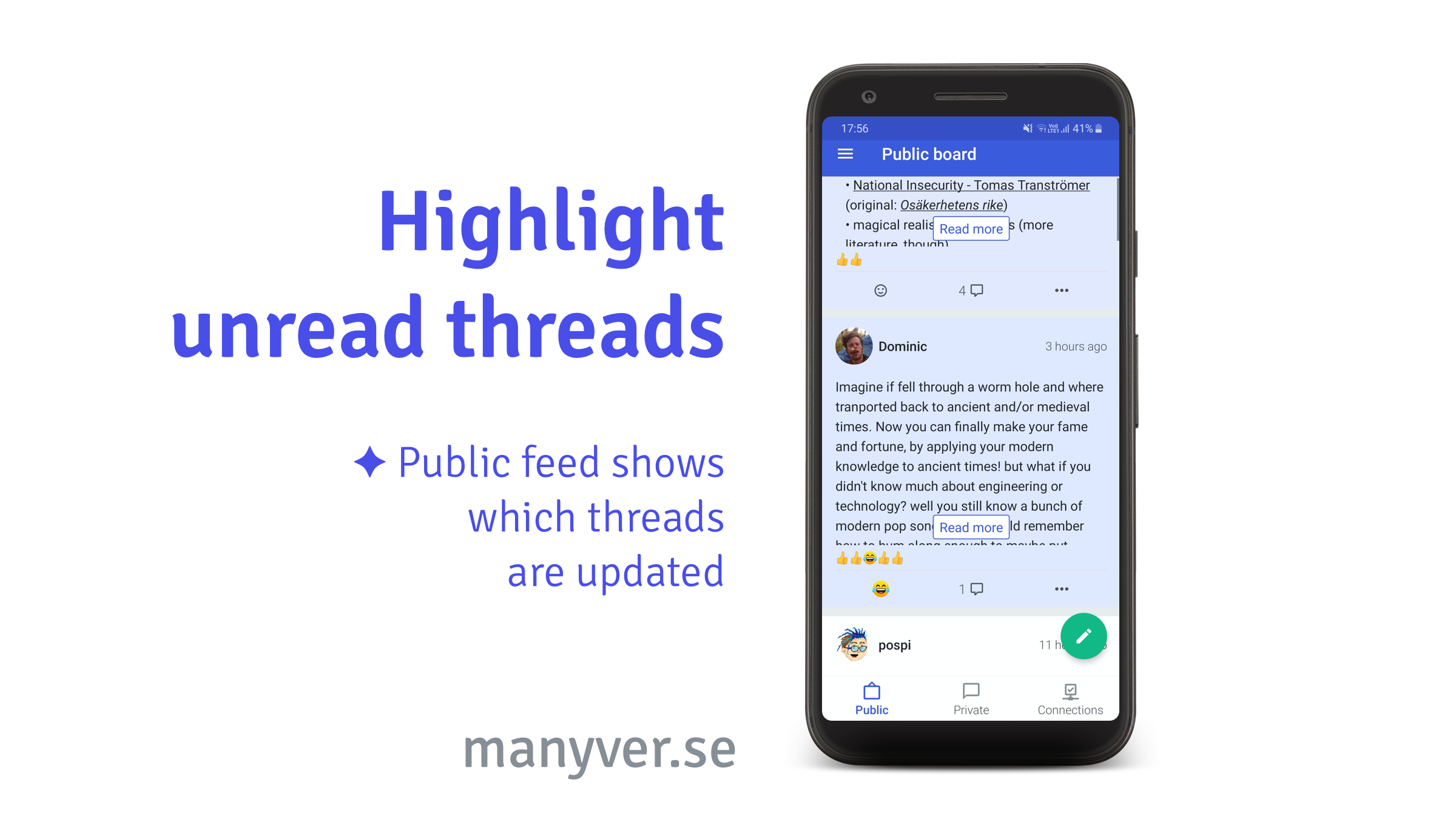 You may have noticed that this time I didn't mention — unlike traditionally in this newsletter — how many hours we have worked last month. That's because I have moved those statistics to a page on our website.

From now on, on the Donate page you can find extensive information on (1) how much donation money Manyverse has received, (2) what the sources of money are, (3) how many hours have been contributed (either funded or not), (4) average hourly rate of team members, etc. This should be updated monthly.

With full transparency, our goal is to be responsible with the funds received, giving backers and organizations confidence that funds donated to Manyverse will be put in good use, mitigating personal gain or superfluous purchases. Eventually, to minimize information asymmetry, we also want to add app installation analytics from Google Play Store and Apple App Store. The only obstacle to doing that is its relatively low priority, and the required time effort to set up an automated way of fetching that data.

Last month I teased about the possible approval of a grant we submitted for user experience (UX) work to be done by Wouter Moraal (now part of our team). I'm happy to announce that the grant proposal was accepted!

In September, Wouter is starting his work on researching the user experience of onboarding onto Manyverse. This project will be split in 3 sprints to be completed still in 2020, and possible outcome would a redesign of the invitation flow and guiding the user through various onboarding hurdles.

In the last newsletter I also mentioned another grant, the "protocol grant". In the SSB community, we have officially announced these news, so I'm now able to share them in this newsletter too.

Some months ago a small group of SSB members (yours truly included) applied for a grant with NGI Pointer, a project funded by the European Commission. NGI Pointer is seeking "internet architects" to work on low-level next-generation internet protocols. Our proposal includes 4 milestones done by a core team of 4 persons and an extended team of invited researchers and others.

To our joy, the grant passed! In the next 12 months, we'll receive 200k€ in 4 parts. Some of us will work full time on it, others will work part time. I myself have aimed for 50% of my time.

What exactly are we going to work on? We still haven't precisely defined the scope, because we have some weeks/months dedicated to defining the scope of our work. But the core team currently wishes to rethink fundamental parts of SSB related to the internal database and networking, aimed at vastly improving performance, speeding up onboarding, and providing more privacy for larger groups.

How exactly does this relate to Manyverse? NGI Pointer is meant for low-level research and development, but we intend for these new advancements to be shipped to production as soon as it makes sense. Manyverse will be one platform on which to deploy these new features, since we want to improve the onboarding experience also via performance boosts and such.

I'll try to keep you updated about this exciting project as we go!

Last, but not least, last weekend we had a small meetup of SSB developers in Northern Finland. We were 9 people from around Europe (some of these included in the NGI Pointer project), and we had 3 full days to discuss the future of SSB, either technically or sociologically. I'm excited for the near future of SSB, we are making things ready for "SSB 2.0", and I believe it will address the biggest needs such as group privacy and easy onboarding.

Have a good weekend!