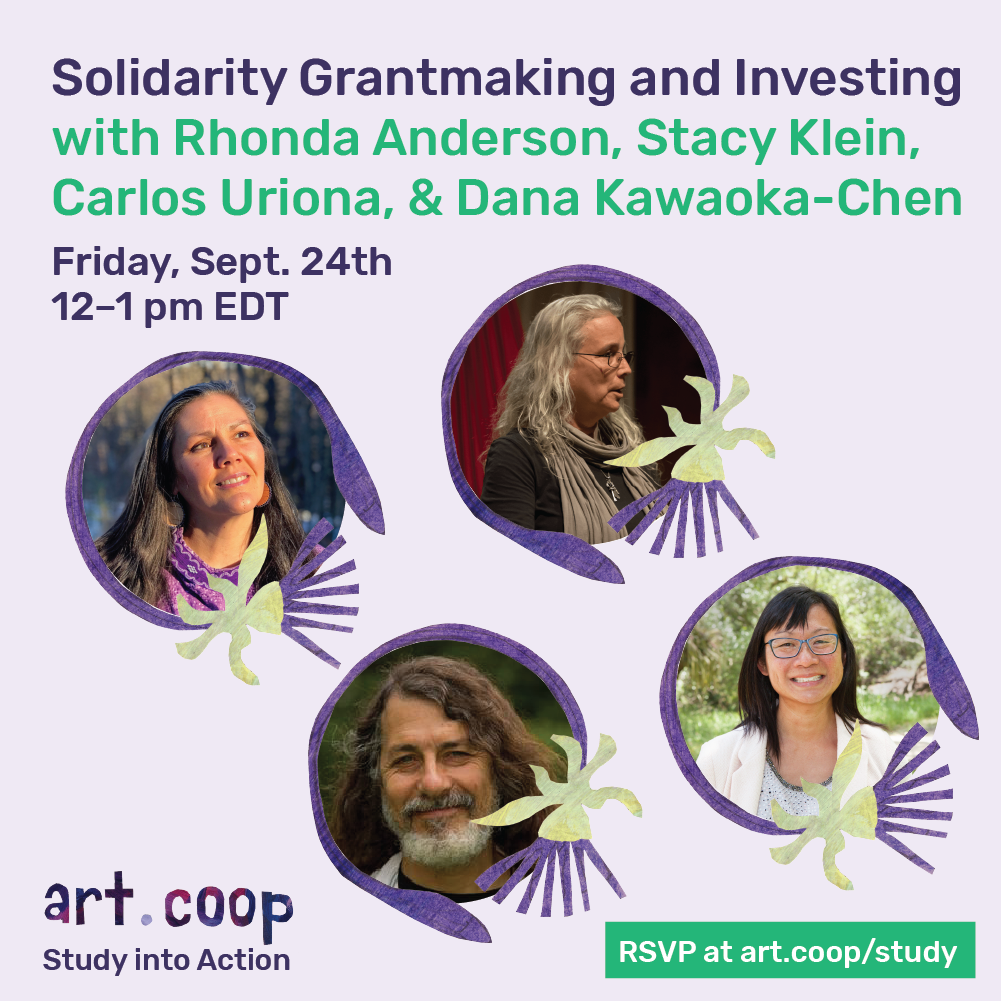 Case studies in solidarity grantmaking and investing to support grantmakers in deepening their commitment to systems-change, cultural restoration and land back 9:00 PT / 12:00 ET

News from Solidarity Grantmaking and Investing

See you soon and a message about last week

Thank you so much for joining us for Solidarity Grantmaking and Investing last week! You can find the recording here. You may notice that the we've r...
Read more
Published on October 1, 2021 by Marina Lopez

Hello, Thank you so much for registering for Solidarity Grantmaking and Investing! Sonic Alchemist and Community Catalyst, DREEEMYwill set...
Read more
Published on September 24, 2021 by Marina Lopez

As Co-Director of Justice Funders, Dana Kawaoka-Chen partners and guides philanthropy in reimagining practices that advance a thriving and just world.  Dana leads with vision and is guided by relationships.  As a practitioner, Dana co-authored the “The Choir Book: A Framework for Social Justice Philanthropy,” and was a primary contributor to “Resonance: A Framework for Philanthropic Transformation.”  You can find her writing on a Just Transition for Philanthropy in Medium.
As founding Executive Director of Justice Funders, Dana grew the organization by aligning its strategy to the visions of movements working for racial, economic and social justice.  Dana’s leadership in facilitating a Just Transition for philanthropy by redistributing wealth, democratizing power and shifting economic control to communities has resulted in millions of philanthropic dollars being mobilized and aligned to build infrastructure for frontline communities to govern themselves.  For her work advocating for deeper investments in social movements and grassroots organizing, Dana was recognized by Asian Americans/Pacific Islanders in Philanthropy (AAPIP) in 2015 as one of twenty-five national “Leaders in Action.”
Dana has previously served in executive functions for two other non-profit organizations.  She has a Masters of Science degree in Organization Development from the University of San Francisco, Bachelor of Arts degrees in American Studies and Visual Art from the University of California at Santa Cruz, and Non-Profit Management Certification from San Jose State University.
Born and raised in the Bay Area, Dana currently lives in San Jose with her family.

Credit from Tanya Jisa to Solidarity Grantmaking and Investing • June 24, 2022

Credit from JuPong Lin to Solidarity Grantmaking and Investing • June 22, 2022

Debit from Solidarity Grantmaking and Investing to Art.coop • June 14, 2022