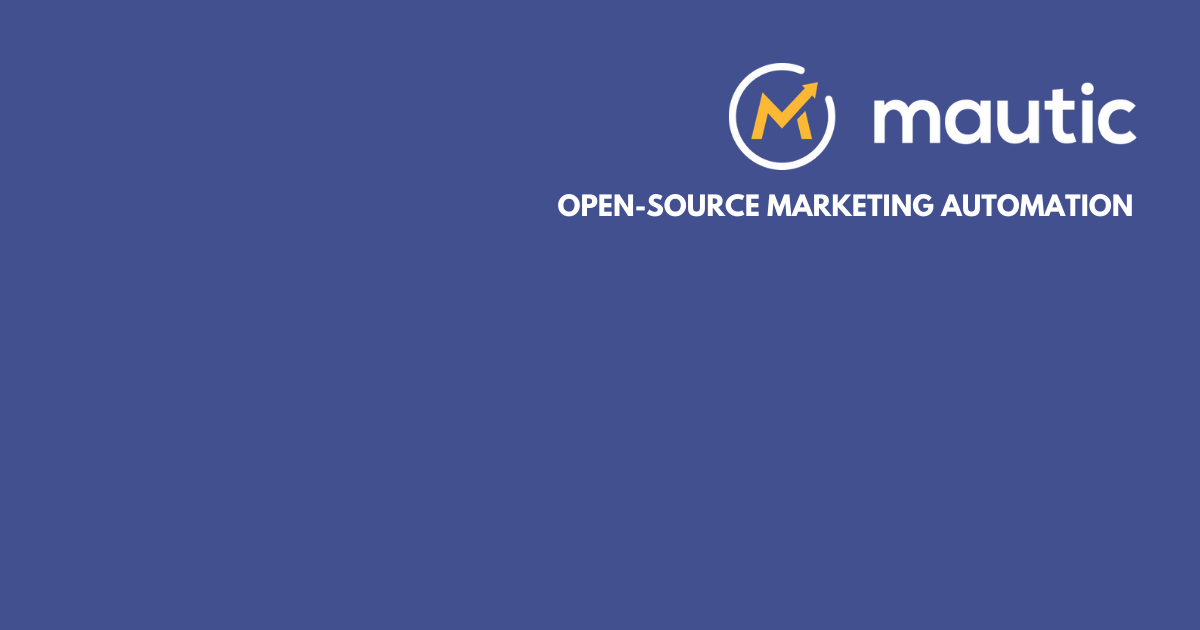 Your name will be mentioned on a dedicated list in the Community Sponsorship page on the mautic.org website with a logo and single link to your roo... Read more

Mautic is hosting the following events.

Mautic is all of us

Thank you for supporting Mautic.

Support the following initiatives from Mautic.

Project
Mautic LATAM Community
A project to hold funds for use with the LATAM community.
Project
Education Team
Supporting the Education Team managing our documentation, forums and translations.

Project
Mautic Next Generation
A rewrite of Mautic on Symfony 5 with API Platform and a decoupled front-end interface.

Project
Resource Management Initiative
To improve the resource management in Mautic with foldering, archiving and exporting/importing of...

Project
Install / Upgrade Initiative
To improve the install and upgrade process and documentation for Mautic.

Project
Marketplace Initiative
To implement a marketplace in Mautic, enabling the management of plugins and themes.

Hello supporters of Mautic! It’s been a busy month in the Mautic calendar, with our in-person con...
Read more
Published on December 1, 2022 by Ruth Cheesley

Hello wonderful supporters of Mautic! We have had some great events this past month which has seen us making good strides ahead with the Mautic 5 update, and also releasing more bug fixes in the 4.4.3 release on Monday. A few things to high...
Read more
Published on October 5, 2022 by Ruth Cheesley

Hello wonderful supporters of Mautic! Another month has gone and soon in my part of the world we will begin complaining about the cold, but for now we are enjoying the last days of summer. I hope wherever you are in the world that you are w...
Read more
Published on September 1, 2022 by Ruth Cheesley

Mautic began with a single focus. Equality. The Mautic community believes in giving every person the power to understand, manage, and grow their business or organization. Mautic is focused on helping this belief become a reality by getting powerful marketing automation software into the hands of everyone.

When David Hurley began Mautic he had a big goal. A plan to move horizons, and change the world. He foresaw Mautic as software made by the people and for the people and as such the community became a top priority and integral part. Those people interested in becoming involved in a community with a vision to change the world should consider getting involved in Mautic. People are the priority. Equality is the goal.

What is Marketing Automation?

The concept of marketing automation is not a new idea and the general idea of automated marketing is one which most are familiar with, though the terminology may be different. Here’s a very brief overview:

Marketing Automation is a platform for saving time, eliminating errors, and improving efficiency for a wide range of marketing tasks across multiple channels.

If you’re interested in learning more there are some excellent resources available which give more background information to get you started.

Want to jump right in? Download the latest release at mautic.org/download and check out our end user and developer documentation.  You'll find us on Github at github.com/mautic/mautic.

Get Involved In the Mautic Community

Of course because Mautic is built and grown as a result of the community involvement your participation is instrumental in its long-term success.

You can quickly get involved in the forums or join us on Slack - also make sure that you sign up for the mailing lists to keep in touch with what's happening in the community. As you become more interested in diving deeper you can attend or volunteer to help establish or co-organize a Mautic Meetup close to you.

In 2020 we established five teams and the Community Council - you can read more about the teams and find how to get involved in our Community Handbook.
This Open Collective allows the Mautic Community to have transparency over its finances and provides a way for individuals and organisations to support Mautic.